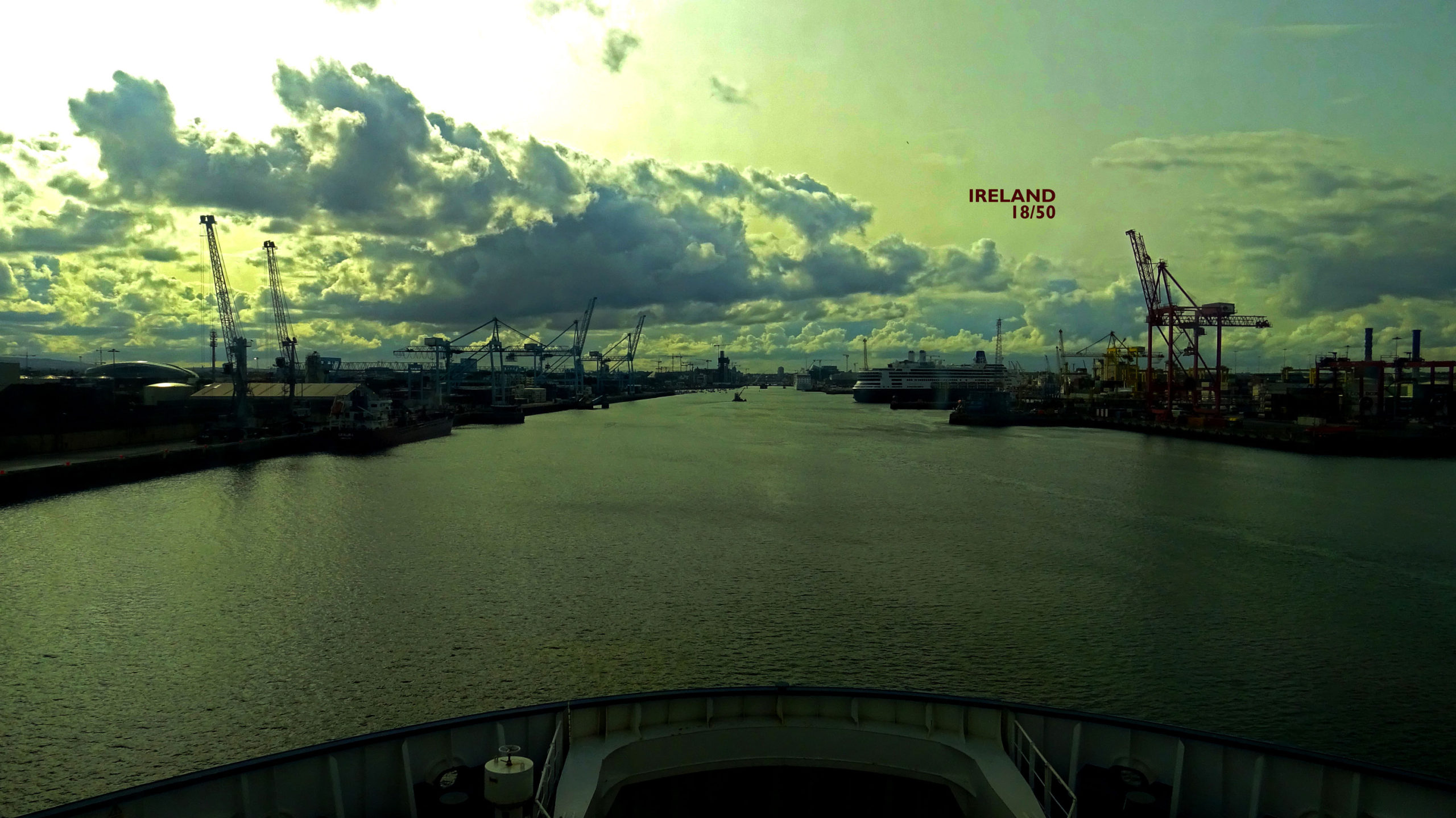 The night bus to London rumbled out of Brussels a good half-hour after its scheduled departure time. It was past midnight before we got to the motorway to Calais. This was not an auspicious start to the journey back to Blighty and things were rapidly to go from bad to worse.

With the new extra restrictions on getting through passport control, everyone had to get off the bus twice (in the middle of the night), get their bags scanned and present their documents first to the French authorities and then to the British a few metres down the road (a situation that is soon to change for the worse once Brexit kicks in). We drove to the vehicle waiting area for the Channel Tunnel… it was all but empty. The driver got on the tannoy. “Apologies but we have missed our slot by five minutes. We’ll have to wait two hours until the next one becomes free.

Two hours?!! Are you shitting me? We could take the ferry to Dover and back in that time. But there we were, trapped onboard an soon-to-be-obnoxiously late bus to London.

It’s 7.30am and I’m starting to panic. The route I had drawn up around the UK and Ireland all hinged on us getting (at the very latest) on this 8.30am train from Euston. The coach muddled through the twisting maze of streets that is south London, my utter dismay at being stung by the unholy trifecta of Britain demanding more passport controls, London at rush hour and the stupid, stupid, STUPID way that our capital city only has one bus station… and it’s right in the middle of the web.

At 7.40am it was obvious that we weren’t going to make it – well, not if we stayed on the coach. We could probably JUST make it if we got to an Underground station. I asked the driver to let us off. He refused, saying he could face a fine if he did (another stupid, stupid, STUPID rule). I explained what we are doing and how critical this connection was. I really wasn’t exaggerating. The driver told me there was nothing he could do: we were kidnapped on this fucking bus until Victoria.

Then I had an idea. “Mate – say we were being drunk and disorderly – you’d have to throw us off, right?”

The driver said he would.

The passengers at the front agreed that we were being drunk and disorderly.

The driver pulled up outside Queens Road Peckham Station and asked us to get off the bus, which we did. We were happy to be off the bus, but I it was quite possibly the worse station to have got off. The next Overground train wasn’t due for an age, so we got on the next train towards London Bridge. However, for reasons I can’t fathom, it terminated at the stop before London Bridge, South Bermondsey, which was some little bitch of station miles from anywhere. We ran off the train to find ourselves a good few hundred metres away from the road. Determined to get back to the Underground we headed to the nearby road and – out of choices (there were no taxis) – jumped on a bus. By now it was past 8am. We got off the bus at Surrey Quays and ran down into the Overground, caught the first train north for ONE STOP and changed at OH FOR HEAVENS SAKE Canada Water taking the Jubilee Line west towards London Bridge. Two stops crammed in like sardines sweating in the commuter rush. Then onto the Northern Line. Even worse. I lost Cricket in the crush. It was 8.10am as the train sauntered through Bank, Moorgate, Old Street, Angel, King’s Cross St Pancras. I watched the seconds tick away. We rumbled into Euston at 8.26am. But that’s Euston Underground – you still have to fight your way up to the mainline station. I ran as fast as I could; one escalator, two escalators, swipe out, up the you’ve-got-to-be-kidding stairs, my backpack had never felt heavier, my mouth was bone dry, my legs were like jelly.

Onto the concourse I looked at the departure board – the 8:30 to Glasgow wasn’t there! I asked at the info counter what platform it was. Six. “You’ll never make it” she told me. I thundered down the ramp towards the platform… only to have the platform doors slam in my face. It was 8.28am. On intercity routes they close the doors two minutes before the train leaves.

Quick quick think of a plan. Just get to Crewe Graham. Crewe is pretty much the UK’s main railway junction. I ran to the adjacent platform entrance. “Where’s this going?” “Manchester Piccadilly.” “Via Crewe?” “Yes”. “When does it leave?” “Three minutes.” “Can I buy a ticket on board?” “No you need to go to the ticket desk. You’ll never make it.”

I pulled out my phone and opened the Trainline app. I don’t think I’ve ever put in my credit card details so fast in my life. HOLY CRAP IT’S £130!!! ONE WAY*. From London. To Crewe, about an hour away. FFS.

I bit the bullet and bought the damn ticket. Just then Cricket finally caught up. They were about to close the doors. I was waving my phone about trying to get the ticket app to update. Since they were, you know, trying to close the doors to the platform, I told Cricket to try to get a ticket for a later train. Finally the app updated and my ticket appeared on my phone. I was the last onto the train, almost in tears.

The train staff took pity on me and allowed me to sit in first class, and fed me life affirming water which was good of them. I asked about the train I missed – since it went via Birmingham it would be pulling out of Crewe ONE MINUTE before we pulled in. Perfect timing. Not.

My original plan for tackling the five countries of the UK and Ireland was to bomb it up to Carlisle on the border with Scotland, then bodge my way over Cairnryan, from where the ferries run to Northern Ireland. Then I’d get the 15.30 ferry, arriving in Belfast just after 17:30. I’d then take the train down to Dublin before taking the 20:30 ferry over to Holyhead in Wales, arriving at midnight ready to take the overnight coach down to London. All being well, I’d be in Paris for the ONCE-A-DAY lunchtime train to Portugal.

But it was not to be. Missing that train at Euston put at least 24 hours onto my journey time. As things worked out, it became more like 72.

Which is why I allowed myself so much redundancy when it came to the bus to London. Not enough, it turned out. I called Cricket and told her not to worry about trying to catch up, it would be easier to just wait in London for me – she could check into a backpackers and get a good night’s kip. Meanwhile I had to redraw THE ENTIRE ITINERARY for The Eurodyssey Challenge from this point forward. Good job first class on the train had free internet.

So then. Crewe. From there I could go to Holyhead first, then over to Ireland, up to Northern Ireland, over to Cairnryan and IF BY SOME MIRACLE I could get to Carlisle, I could hop on the night train from Glasgow in the wee small hours.

Since there was no way of me reaching Cairnryan in time for the afternoon sailing, it was Holyhead or (total) bust.

Annoyingly, this would mean I couldn’t meet up with my mum in Warrington as planned in order to do a much-needed “bag drop” in which I changed out all my dirty clothes for clean ones.

I changed trains in Crewe, met a friendly police officer (check out my Facebook Live video) and went to Chester on the border of Wales. A quick change of trains and before midday I was at Holyhead. I checked onto the ferry in good time was on schedule to arrive in Dublin around 5pm.

But Plan B was not to be. You had to have a car to take the late ferry from Belfast to Cairnryan. Hmm… well, here’s Plan C: go up to Belfast as planned, but instead of going to Scotland, I’d go to Liverpool on the overnight ferry, meet my mum, get clean clothes, then first train in the morning up to Scotland and back down to London.

Nope. It was sold out.

FINE. Plan D: go to the first town over the border in Northern Ireland, come back to Dublin, get the 2am ferry back to Holyhead, arriving at 6am, pick up my clothes in Liverpool on the way up to Scotland, get there for midday, down to London, 4pm Eurostar to Brussels and then AT LEAST we could tick Luxembourg off the list.

After arriving in Dublin I took the 6pm train towards Belfast, getting off at the town of Newry just over the border into Northern Ireland. When Ireland had its independent referendum in the 1920s, the parts of Ulster that voted to stay a part of the UK were allowed to do so. Coming from a city that voted to Remain in the EU, I wish that was the case now.

The train station for Newry is right out of town so there wasn’t much to do for the 45 minutes I was there waiting for the train back to Dublin. Once back in Ireland’s capital I met up with my friend (and Odyssey Hero) Thierry. We had a few hours to kill before the ferry left to go back to Wales, so we went for a pint of Guinness and a good old chinwag.

At 2am I was on the ferry ready to go back over the Irish Channel. Unsurprisingly, I don’t remember much of the journey as I curled up on a seat and fell fast asleep. What a day.

*Yes yes I know I should have got a return for same price. Bite me.