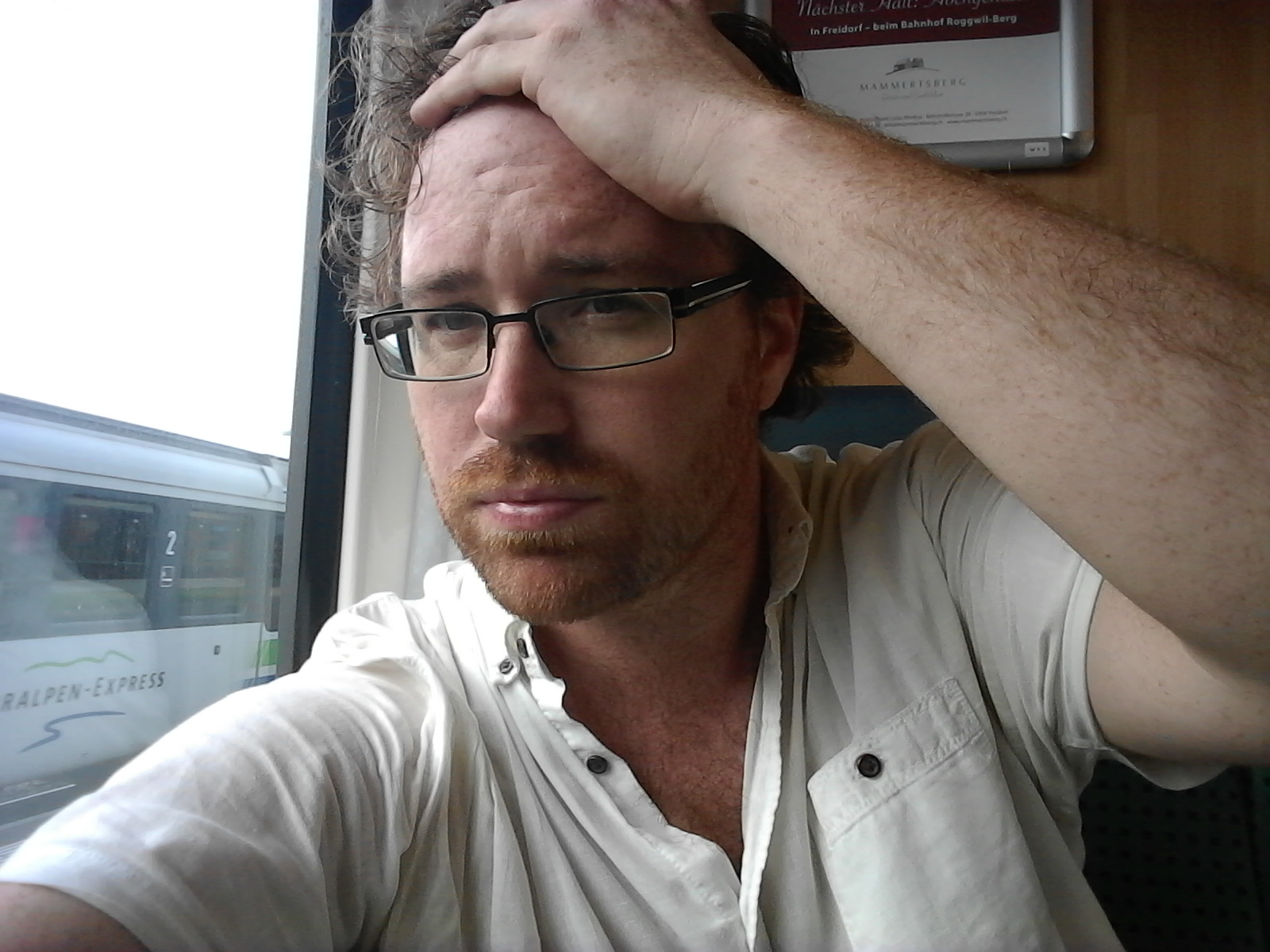 I didn’t realise but the bus didn’t go to Nice, it went to Nice airport. Which isn’t served by a dedicated trainline. So Cricket and I had to walk in the early morning sun to the nearest station, which should have took 5 minutes to walk, but because airports and their environs are set up around the needs of cars rather than the needs of squishy little human beans we had to take a diversion and it ended up taking the best part of half an hour. The good news was that the train to Nice Ville was late, and so by 08:21 we were on the express from Nice Ville to Vintemille just over the border into Italy.

On the way we passed through Monte Carlo, the capital of country number 25: Monaco. Oo oo we’re halfway there!!

I got off the train, jumped up and down, then got back on the train.

We had an hour or so in the pleasant seaside town of Vintemille, we went for a stroll and had a coffee before boarding the 11:05 train to Milan.

Now from Milan we needed to get through Switzerland to Liechtenstein in time to catch the 22:27 train from Feldkirch (just over the border into Austria). However, since there were no direct trains, we would have to change a couple of times along the way – and our transfer times were short. SUPER SHORT. The first was five minutes. The second was just THREE.

But that’s okay, I’ve been informed that if you look at your watch and the train is late is Switzerland then it’s either not a Swiss train or you’re not wearing a Swiss watch.

Here goes nothing we took the 15:25 Milan to Zurich train, scheduled to arrive in the Swiss town of Arth-Goldau at 18:09. In the event, it arrived TWO MINUTES LATE, at 18:11.

I asked our conductor what platform we needed for the 18:14 to Uznach. He told me platform 8. As we rumbled onto platform 2 a rude Baby Boomer (aren’t they all) elbowed me out of the way from the door because she wanted to get off first. With her damn luggage. And oh did she take her sweet time doing it. Eventually free of the train, we ran full speed to platform 8 and I jumped on the 18:14 train. But something felt wrong. My spidey-sense was tinkling. I asked a girl if the train went to Uznach. She said “no you’re on the wrong train”. It was 18:13.

“Off off! Get off!” I hollered at Cricket as we tumbled over luggage and Sunday commuters, free of the train I ran down to the underpass. DB Bahn had told me that it was platform 5, I should have just trusted DB Bahn… as I ran up the stairs for Platform 5 I could see the train, the right train, the other 18:14. I made it to the door and hit the button… it didn’t open. The train started rolling forwards. I screamed to the indifferent gods “FUUUUUUUUCK!!!”

Then something miraculous happened. The train stopped. The doors opened. Cricket and I hoped on board, unsure what the hell just happened.

Whatever happened, it was worthy of a hi-five. Unlike the change at Auth-Goldau, the change at Uznach went without a hitch (but we ran anyway) and we arrived in the town of Buchs, walking distance from Liechtenstein, just as the sun was setting and with a good few hours to spare before the night train left Feldkirch in Austria, the other side of Liechtenstein, but just 15km away and totally taxi-able. Liechtenstein is like, super small.

After all that excitement, Cricket an I decided that we deserved a second pizza of victory, which we ate at a little restaurant in the middle of Vaduz, the capital of Liechtenstein. Afterwards took a cab over the blink-and-you’ll-miss-it border into country number 29, making the hoot-hoot choo-choo to the city of Linz in exceptionally good time.