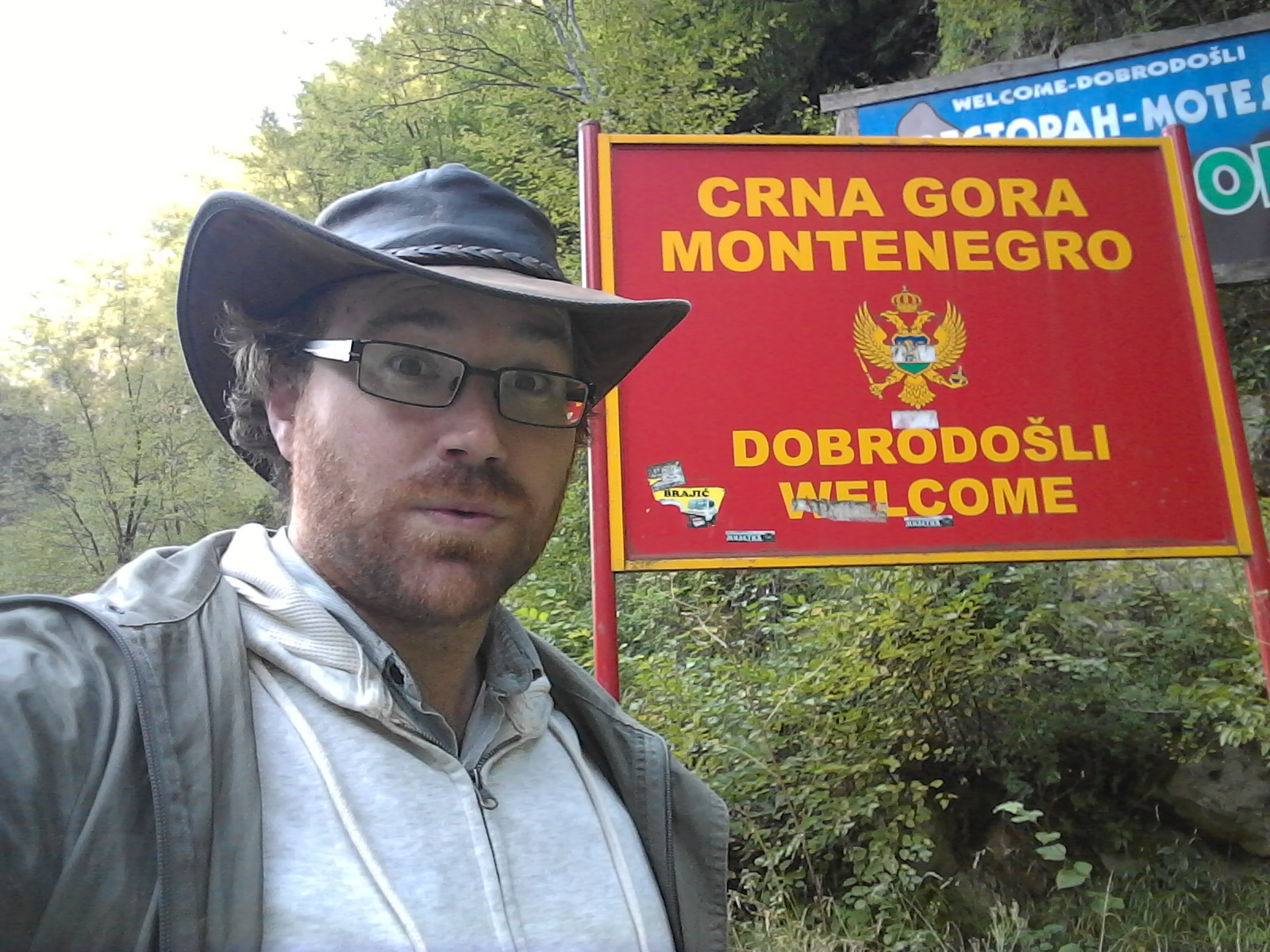 After yesterday’s somewhat unexpected blitz through a quite frankly staggering number of countries, today we arose from our slumbers as we arrived in Podgorica, the capital of Montenegro, early enough to hear dawn crack.

Being a country and a good few hours ahead of schedule (for a change) and after us finding a SECRET TRAIN (that wasn’t listed on DB site) to the town of Bijelo Polje a few km south of the Serbian border not listed on the DB Bahn site, we decided on a scheme so cunning that even before we had formulated it, it had been made professor of cunning at Oxford university.

We would take the secret train, quickly hop over to Serbia in a taxi, come back to Bijelo Polje then take the 10am bus from there to Sarajevo in Bosnia, arriving so early that the Powers That Be would have no choice but to ensure we made it down to Malta the next day for the MAGIC DAY FERRY that runs on Fridays. This would be nothing short of a miracle and would all but ensure I finished the challenge in just 18 days.

We arrived at the border just after 9am, which gave us about an hour to cross the border into Serbia, get stamps, photos etc. and come back for the bus to Sarajevo. We took a taxi with a guy called Dan the Taxi Man, driving through the mountains into Serbia. The last time I came down this road it was the middle of the night during The Odyssey Expedition. It was great to be able to do it in the daytime, breathing in the magnificent vistas along the way.

After getting some pics at the border we raced back to Bijelo Polje, hung around for far too long at the bus station before being informed that the 10am to Sarajevo only runs on Mondays, Wednesdays and Saturdays. And today’s a Thursday.

So we hiked back to the train station to see what our options were. Along the way we ran into Dan the Taxi Man. He had an idea: we could take that morning’s train to Belgrade up to a place called “Priboj” in Serbia on the border with Bosnia and Herzegovina. From there we can take the 1pm bus to Sarajevo, hurrah!

So then, back to Serbia! For realz this time. However, when we arrived at Priboj the news was not good. There was no 2pm bus. It was a 1pm bus… which left 20 minutes before we got there. And the next bus wouldn’t be until 5pm. At least that was on time. Thus began a mad race to try and get to Sarajevo in time to catch the nightbus to Ljubljana, the capital of Slovenia via Zagreb in Croatia. I was tremendously concerned that if we missed the bus, we’d have to spend the night in Sarajevo, thereby condemning the Eurodyssey expedition to take 21 days instead of 18.

It was crucial we made that bus!

The only problem was that our bus was scheduled to arrive in the Bosnian capital at 8:45pm… and the bus to Slovenia was scheduled to leave at 8:40pm. So I asked the bus driver (very nicely) if he could take a slightly shorter break so we could get in five minutes early. Being utterly awesome, he agreed. But the journey wasn’t a fast one. Waiting to cross the border and then driving along some of Bosnia’s less than magnificent roads (at one point we crossed a wooden bridge. No, seriously… it was made of wood, the actual road was made of wood!

But we got there with literally seconds to spare. Cricket ran to the bus to hold it while I got the tickets. We couldn’t just buy them on the bus ARRRGH. So I ran to the ticket office. Massive queue. I jumped it, running to a window that was closed but a guy was sitting behind it reading the paper.

I slammed my debit card down on the desk. “Two tickets to Ljubljana please… the bus is about to leave! Please!”

The guy, all moustache and indignation, slowly lowered his paper and looked at me with a mixture of bemusement and scorn.

“No cards… cash only,” he growled.

I pulled some Euros from my wallet, mixed in with Macedonian denars, Albanian leks, Serbian dinars and some other happy currencies…

Oh for the love of–

The guy pointed out of the door.

I legged it outside with all of my bags. The machine took my card and gave me money options. I had no idea how much the Bosnian convertible mark was worth to the pound, so I just stabbed the “200” option on a wing and a prayer.

Meanwhile Cricket was having difficulty stopping the bus from leaving. The driver really wanted to get going! It was now 8:45pm. I grabbed the cash and ran back into the ticket office, flinging the money at the guy. Please! Ticket!

Luckily, Cricket had given me her passport, this is all very usual for international bus journeys, but still, the bus was raring to go. The ticket guy took the passports and entered our names into the system… so… damn… slowly…

I thought I was going to burst.

The bus beeped its horn, but Cricket, bless her, stood with one foot on the platform and the other foot on the bus. “One minute, please!”

Thirty seconds later I was running down the platform like a maniac, hot, sweaty, but clutching the tickets as though I’d just found them in a Wonka bar.

I boarded the bus, smiled at the driver, and away we went.