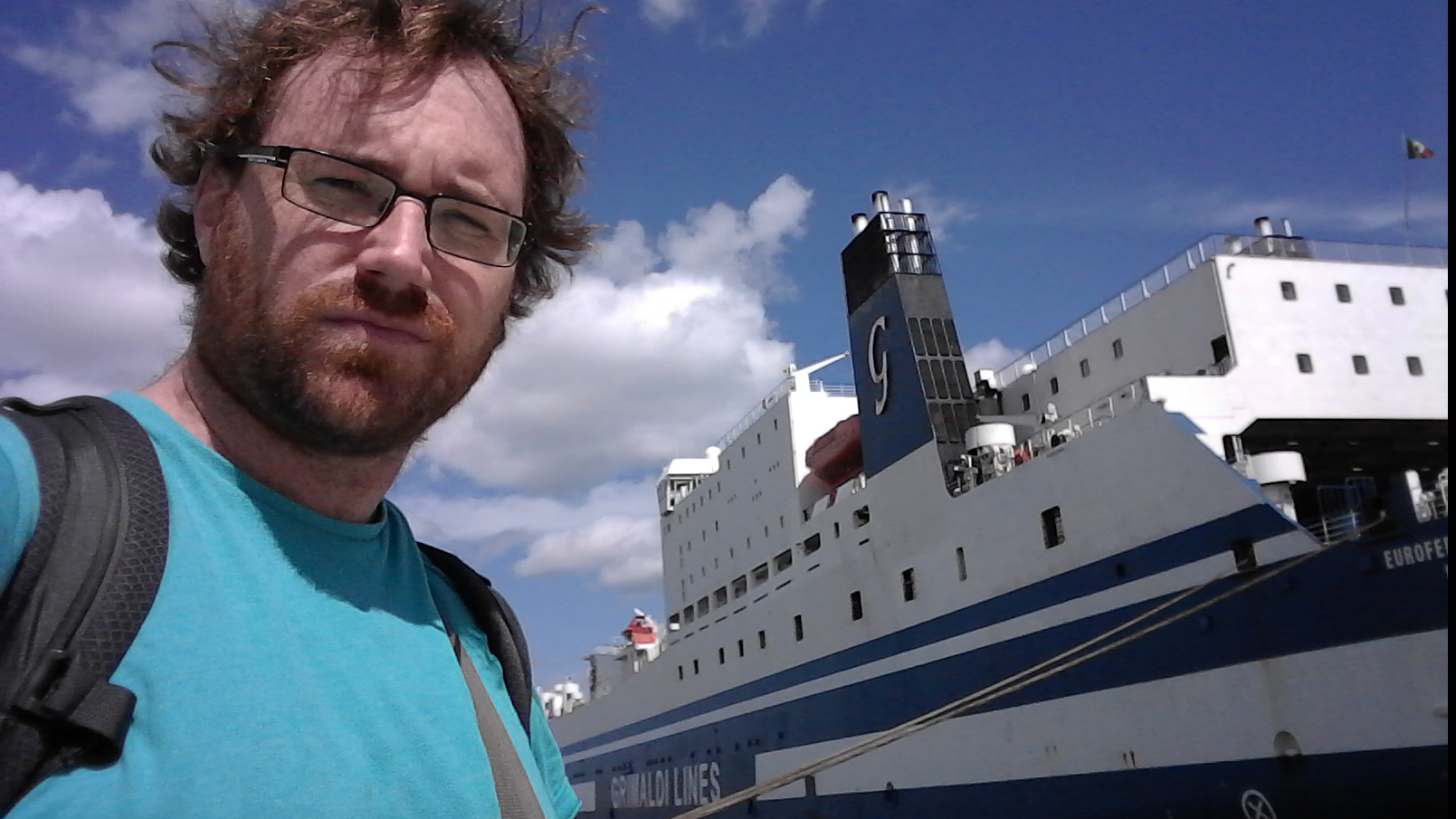 My alarm went off at 5am.

So I got up at 8am for the 8.55am train to Brindisi, a few miles down the coast from Bari. Why Brindisi, you ask? Well because there was a ferry leaving there at 1pm with my name on it. It was going to Igoumenitsa in Greece, which would be… hurrah… country number 48 of The Eurodyssey Challenge.

There was only one problem.

It was a Grimaldi ferry.

If you asked me, straight up, what the worst form of transport known to man is, I’d be tempted to say the Shissiwani II. Closely followed by Greyhound buses. But the Grimaldi ferries come in very close third . They’re just awful. It’s like they looked at the luxury of a cruise ship and thought, “naaaaaah… comfort is for wimps! Let’s deck the place out like a cross between a grotty Northern working man’s club and a doctor’s waiting room from the 70s!”. It’s like they want you to fly.

But given the events of the night before, it was Hobson’s choice. I could either take the Grimaldi or race up north, back around to Slovenia and try and get into Greece overland via the Balkans.

In hindsight, a race around the Balkans might have been the smarter move.

It was a short walk from the hotel to the train station. Along the way I saw dozens of taxis. It was like they were taking the piss. I could have hung about in Bari for a couple of hours and taken a later train, but if there were any problems along the way, I’d miss the ferry. After the events of last night I a) fancied having some wiggle room and b) kinda wanted to get out of Bari as soon as possible.

I arrived at Brindisi train station around 10am. Brindisi is a lovely little place, less built up Bari and felt a lot more easy-going. I had plenty of time before the ship left, so in my infinite wisdom I decided to walk to the port, down the Corso Umberto I, all the way to the water. I turned right down Via del Mare, and made my way to the quayside entry on Via Spalato. I showed my ticket for the ferry, but the guy there was having none of it. The only way into the port was on the bus. And the bus left… from the train station.

So, on to the bus and into the ferry terminal. I was the first to check in, before having to walk what felt like 17 miles to the boat itself, the walkway. marked with white lines on the concrete, constantly and irritatingly crisscrossing over the roadway where massive lorries were ploughing back and forth. Us squishy humans are so often an afterthought when it comes to urban planning.

Anyway, onto the ferry. I was the first passenger to board. It was just as grotty as expected, Grimaldi has priors in this respect. But I didn’t need it to be nice. I just needed it to get me to Greece. I scoured the deck for an electrical outlet, I found one in the corner of the bar, plugged in my laptop and spent the bulk of the journey wisely backing my videos and pictures of the journey thus far onto an external hard-drive.

The ship pulled into Igounenitsa around 8.30pm. I disembarked. Ah yes! My 48th country YAY! I walked over to the coach station to find it closed, closed and closed again. No night buses anywhere it seems. And Igoumenitsa doesn’t even have a train station. In fact, the nearest trainline is 120km away.

The credit crunch hit Greece worse than most countries. Put simply, the Greek government were spending more than they were taking in taxation and it came around to smack them in the face when they found themselves unable to borrow enough dig themselves out of the hole they had dug for themselves. Yes yes I know it wasn’t helped by idiotic way the Euro has different interest rate depending on the country. In order to balance the books, the government embarked on a scheme of austerity in return for EU funding designed to help get the country back on its feet. That scheme was rejected in a referendum. But the government decided that it was a bit of a complex issue to be asking Jeff down the pub, and promptly ignored the immediate and ill-informed “will of the people” for the long-term good of the people. Fancy that!

So austerity it was then, which meant a huge scaling back of public transport. Time will tell if that was a good call. But here and now: no overnight buses to anywhere, and I’m guessing that’s the reason.

However, after yesterday’s ferry-taxi-bus-bus-ferry-bus-taxi-bus-ferryfail-hotel extravaganza, I was a bit strapped for cash. Happily, my friends were following my journey as it happened online. I got a message from Ciaran the EU van driver, the nicest man in the world. “Want a hotel?”

People really are amazing, aren’t they?